As fascism spreads, German refugee Georg flees to Marseille and assumes the identity of the dead writer whose transit papers he is carrying. Living among refugees from around the world, Georg falls for Marie, a mysterious woman searching for her husband – the man whose identity he has stolen. Adapted from Anna Segher’s 1942 novel, TRANSIT transposes the original story to the present, blurring periods to create a timeless exploration of the plight of displaced people. Nominated for the Golden Bear at the Berlinale. Best Film award at the Dublin International Film Festival.

Tickets/Admission: At the door, Member Admission $5, Membership $5 a year. 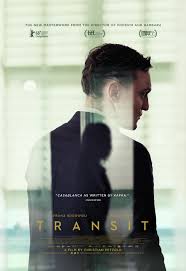 Subscribe to this page
Close Old Browser Notification
Browser Compatibility Notification
It appears you are trying to access this site using an outdated browser. As a result, parts of the site may not function properly for you. We recommend updating your browser to its most recent version at your earliest convenience.